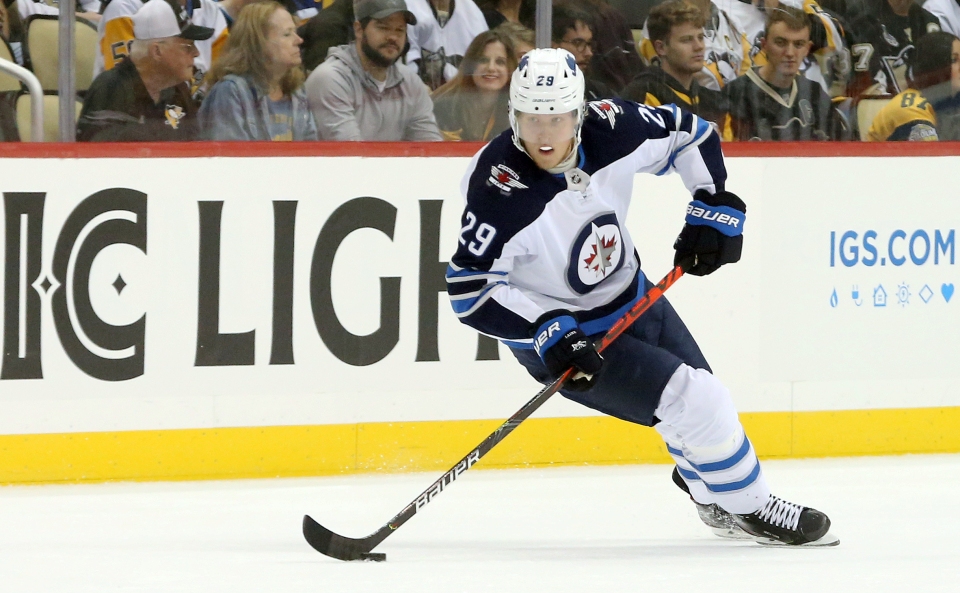 After a frustrating loss in their home opener, the Chicago Blackhawks look to regroup and avoid their first 0-3 start in 22 years Saturday night when they host the Winnipeg Jets in a Central Division clash.

Jets back on road after successful home opener

Winnipeg (3-2-0) is looking for a third straight win after kicking off its home slate with a 5-2 victory over the Minnesota Wild on Thursday night.

The top line of Patrik Laine, Blake Wheeler, and Mark Scheifele dominated the contest, accounting for three of the five goals. Laine had two goals and two assists for his second straight multipoint game and is off to a fast start with three goals and seven assists.

Laine with the dangles!! KC with the finish!!

“He can be a power forward, he can be a strong man where you’ll start to see him driving people to the net with him, with the puck, controlling it in the offensive zone,” coach Paul Maurice told the Winnipeg Sun. “He can finish checks. Those are three big men on that line together. They can play most parts of the game well.”

Wheeler chipped in a goal and an assist and notched his 700th point on his second-period goal.

Connor Hellebuyck, who turned aside 38 shots in the win, looks to extend his personal winning streak over Chicago to five games after two victories last season despite yielding eight goals on 59 shots. Hellebuyck has been far more stingy at the United Center, posting a 4-2-0 record and 2.01 goals-against average and .936 save percentage in six starts.

Hawks fail to get over hump in loss to Sharks

After failing to lead in their season-opening loss to the Philadelphia Flyers, the Blackhawks squandered four one-goal advantages in Thursday night’s 5-4 defeat to the San Jose Sharks.

In the first period, Chicago’s penalty kill struggled as it allowed both equalizers trying to fight off penalties. In the second period, Andrew Shaw and Dylan Strome had goals canceled out at even strength. In the third, the Blackhawks were held to eight third-period shots and failed to find a tying goal in the final 15:13.

Dominik Kubalik provided a spark as part of Chicago’s third line, scoring his first NHL goal and proving effective with Brandon Saad and David Kampf. Blackhawks coach Jeremy Colliton bumped him to the first line with Patrick Kane and Jonathan Toews for the third period, but the chemistry was not as apparent.

“We’re trying to get that other line going, Toews and Kane,” Colliton told the Chicago Tribune about flipping Kubalik and Alex Nylander. “And so we thought he was the one who was really … he was dynamic. I thought he was great, especially early on. We had a lot of momentum with the other line, too.

“I thought they were excellent, both Kampf and Saad. They were playing well. We’ll see, that (decision) will be something we consider over the next day or so.”

Kane, coming off a career-best 110-point season, has a goal and three assists in his first two games while Toews has yet to register a point.

Robin Lehner will make his Blackhawks debut after Corey Crawford yielded nine goals on 72 shots in the two losses. A key contributor to the New York Islanders reaching the Eastern Conference semifinals last season, the Masterton Trophy winner had career bests of 25 wins, a .930 save percentage and a 2.13 GAA.

He is 4-0-0 with a 2.76 GAA in five career starts versus Winnipeg, winning his only matchup last season despite yielding four goals on 26 shots.

The teams have combined for seven or more goals in six of their last seven meetings overall and the last three in Chicago. The Blackhawks have yet to look cohesive defensively at both even strength and the penalty kill, and with the Jets’ top line coming off a strong performance, the over is a solid play.

Even with the number ticking a half-goal higher, the over is still a solid play here. There is little trust in Chicago’s defense, even with Lehner making his season debut, and the Blackhawks offense is also too good to not make a significant contribution.

The pick is the Jets, who are coming off a solid performance and in a better early season rhythm as this will be their sixth game of the young season. Additionally, the Blackhawks penalty kill is a mess — they have allowed three power-play goals on six kills and let the Sharks convert twice in three chances after they entered the game 1 for 17.

Hellebuyck also has had Chicago’s number of late and has a solid track record at the United Center.

A logical pick based on last season’s series as well as Chicago’s questionable defense and a solid top line for Winnipeg this season, getting a margin of error and a potential plus-money return is a must-play.

Note, this line was taken off Rivers Casino, so shop around to see what is available in terms of player props for this game. Despite not registering a point in his first two games, Toews played well in both home matchups versus Winnipeg last season — he had three goals and two assists.

Toews has 10 goals and 13 assists in 30 career games versus the Jets and does not lack for shots when facing them at home, taking four or more in six of the last seven games. He has a much better potential return than Kane, who is only plus-115 despite not netting a goal in the last five meetings overall.

A pick riding Hellebuyck to have a strong first period while the Jets’ top line picks up where they left off against Minnesota. Winnipeg outscored Chicago 8-5 in the first period of their four meetings last season, and the feeling is the Jets can get two past Lehner in the opening 20 minutes.

OVER 2 goals 1st period (Even)

The safer play is out there at 1.5 goals (-191), but the feeling is there are more than two goals out there. As mentioned before, the teams combined for 13 first-period goals in 2018-19, and three of the four contests had at least three tallies in the opening session.