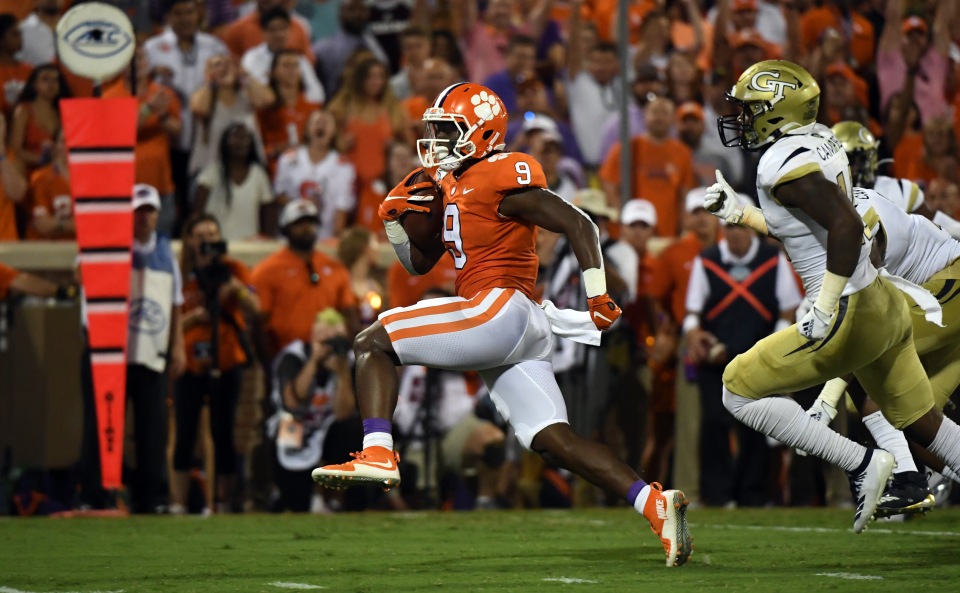 With the exception of Alabama, no one has given top-ranked Clemson more trouble the last two-plus seasons than Syracuse.

The Tigers return to the site of their most recent regular-season defeat Saturday when they face a Syracuse team that got caught looking ahead to this prime-time showdown.

Trevor Lawrence was not on campus the last time Clemson (2-0, 1-0 ACC Atlantic) traveled to upstate New York, where the Orange (1-1, 0-0) bottled up the Tigers running attack save two long touchdown runs by Travis Etienne and Tavien Feaster and pulled off a 27-24 upset of then-No. 2 Clemson on Oct. 13, 2017.

In the 24 games since, the lone blemish for the Tigers was a 24-6 loss to Alabama in the College Football Playoff semifinal that season — a loss they emphatically avenged with a 44-16 pasting of the Crimson Tide in last season’s championship game.

Clemson also gained a measure of revenge against Syracuse last year, but it did not come easy as Etienne rushed for a pair of scores in the final 11:08 and finished with 203 yards as the Tigers escaped with a 27-23 victory.

Clemson has picked up where it left off and shut down previously 12th-ranked Texas A&M 24-10 last Saturday to complete a home-and-home sweep of that series. Lawrence threw for a touchdown and ran for a second in a 17-point second quarter as the Tigers extended their winning streak to 17 games.

Syracuse (1-1) tumbled out of the AP Top 25 after being manhandled 63-20 at Maryland last Saturday. The Orange allowed touchdown drives on six of the Terps’ first seven possessions and nearly 400 yards in the first half as they trailed 42-13 at intermission.

Quarterback Tommy DeVito committed a pair of turnovers that contributed to the deluge of points, with the defeat taking some of the luster off this game — one many in Syracuse were promoting as its the Orange’s most meaningful game since opening the 2014 season against Notre Dame.

DeVito did throw for 330 yards and three touchdowns, but most of it came with the outcome well decided as Syracuse yielded its most points since a 64-43 loss to Wake Forest in 2017.

Swinney, Tigers taking nothing for granted versus Orange

“Last year, they had us on the mat for a two-count and we were able to get up and win the match,” Swinney said at his weekly availability. “We are very well-aware of the effort and toughness that they will bring. Last week’s game got away from them, but that won’t be the Syracuse that we face this week.

For everything that Lawrence has accomplished in such a short period of time, it is also worth remembering this is only his fourth start in a true road game since taking over the starting quarterback spot. He threw for 784 yards and seven touchdowns in wins at Wake Forest, Florida State, and then-No. 17 Boston College last year with at least 20 completions in each game.

Lawrence, though, was not around for the end of last year’s game versus the Orange after taking a shot to the head in the second quarter. Etienne did most of the work in rallying Clemson as Chase Brice was under center after Lawrence went 10 of 15 for 93 yards.

Swinney, though, thinks he has a much better defense than the one he brought to Syracuse two years ago when he felt the Tigers “couldn’t cover them” and the Orange “either made the play or we interfered.” Clemson limited Texas A&M to 289 total yards, including a mere 53 on the ground on 28 rushes.

“Defensively, I just thought they accepted the challenge,” Swinney told TigerNet.com. “A&M put 500-something yards on us last year. They only averaged two a carry and we affected their quarterback. We created two turnovers, sacks, a bunch of negative yards. A lot of positives but a lot of things we can improve on. We need to make more plays that are there.”

DeVito watched last year’s game from the sideline as Eric Dungey nearly engineered a second straight upset of Clemson. After the Orange were throttled by Maryland, coach Dino Babers is leaving no stone unturned to make sure his team is in top form to face the Tigers.

Before we get any deeper into this Syracuse football season, we have to address the 800-pound gorilla in the room: Tommy DeVito isn't Eric Dungey. #OITNF #Orange https://t.co/LJl1oWHMwt

“Have you ever been knocked out before? When you wake up the blues are blues, the reds are reds, and everything seems clearer than anything has ever been before,” Babers told the school’s official website. “It’s like rebooting your entire computer. It’s really kind of eye-opening. That loss was like being knocked out and then you wake up, so we’re going to see how we do. Maybe we rebooted and everything’s going to be OK, but we’ll have to see.”

Babers’ primary concern is a reshuffled offensive line that will likely be without center Sam Heckel for a second straight contest. He suffered an upper-body injury in the season-opening victory at Liberty and did not travel to Maryland.

Heckel’s absence would result in Airon Servais moving from tackle to center, and three of Syracuse’s other linemen are still very green as with redshirt freshman Carlos Vettorello and redshirt sophomore guard Dakota Davis coming off their first two starts while South Alabama transfer Ryan Alexander claimed the tackle position vacated by Servais.

After being gashed for 354 rushing yards by the Terps, there is genuine concern about Syracuse being able to stop Etienne, who has averaged 8.5 yards per carry in his two games against the Orange and recorded one of his career 200-yard rushing games in last year’s win.

Saturday’s loss marked the most rushing yards allowed by the Orange since the Tigers overran them for 293 in last year’s meeting.

“If you don’t keep pace with that offense, the game is over. It’s almost like you got to hit ’em just right, Buster Douglas vs. Mike Tyson,’’ said Babers. “If you don’t hit him with the upper cut, you’re getting knocked out. I haven’t seen any team do it. I saw what they did to Alabama (44-16 win in last season’s national title game) and they have a lot more coaches and things than we do and they were playing for a big ‘ol ring. So they’re really, really good. Probably one of the best teams of an era that you’re going to see.”

“I look at Clemson and think about the [1972 Miami Dolphins] going undefeated in the National Football League. It’s only been done once. Other teams may get a Super Bowl ring, but they don’t go undefeated,” Babers said. “What Clemson did going undefeated is impressive, but to me that’s a heck of an accomplishment, and now they have the opportunity to do it again. It’s been very, very impressive.”

This is a confidence pick in Clemson’s defense as much as it is against Syracuse’s offense, with there being far less trust in DeVito to potentially match Lawrence point for point. The under has hit in five of the last six meetings between the teams, and the Tigers are coming off a solid win over Texas A&M in which they shut down impressive Aggies quarterback Kellen Mond.

While the spread has come down in Clemson’s favor, the total has gone up in favor of under bettors and comfortably cleared a touchdown total. Again, there is not much trust in DeVito getting the Orange above 14 points in this game as the under is the play.

Another confidence pick in Clemson’s defense given DeVito is no Kellen Mond, whom the Tigers dispatched fairly easily last weekend. In addition to being blown out at Maryland, two of Syracuse’s scoring drives in its season-opening win over Liberty started in plus-territory.

The expectation is that Syracuse will not score 16 first-half points against Clemson like it did last season. That also matched the amount of points the Tigers gave up in their other seven ACC games in 2018. This may take some work, and the flat TD+FG number does not offer any favors taking Swinney’s team, but Clemson should be primed for this game after being taken to the wire the last two years.

The two biggest things working against Syracuse are an unproven offensive line and Etienne running through the defense. The former, especially at center, creates problems for DeVito if he does not have a consistent pocket to throw from. The latter is especially concerning given how awful the Orange were at Maryland.

Additionally, Swinney likely has been in his team’s ear all week about this game and also how the Tigers need to keep Lawrence upright considering how difficult last year’s contest was at home without him. This has the feel of a gradual extension of the lead in which Clemson narrowly covers at the end.

While the line has made a half-point tick down closer to kickoff, the fact it is a low-side hook on a touchdown number is helpful in taking the defending champions.

The only way to be more aggressive with this pick is if a high-side hook gets added to this touchdown total. This is as much an anti-DeVito pick as it is a pro-Clemson defense one because the expectation is for the Orange to have fewer than 10 points in the first two quarters.