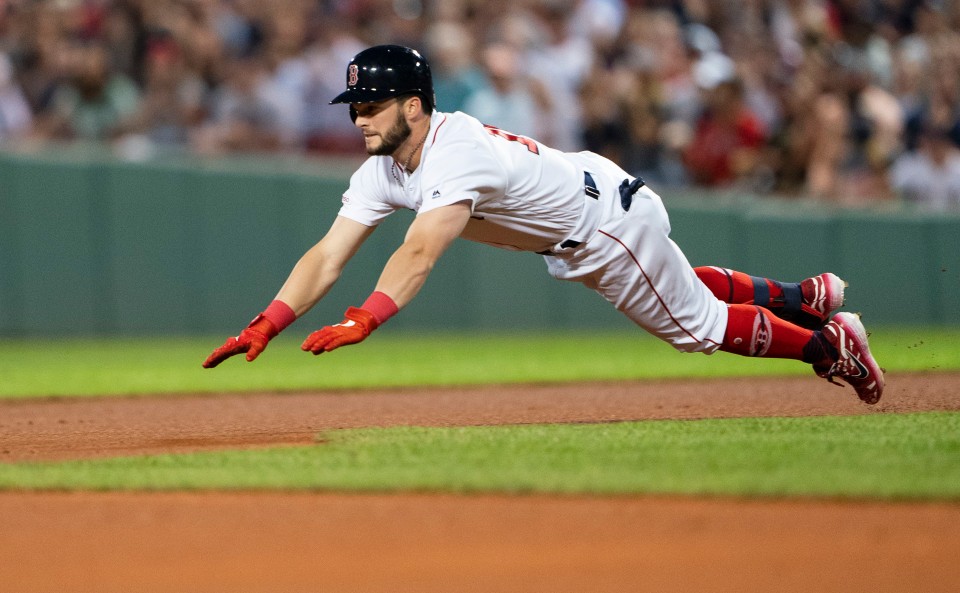 He has rarely won pretty this year, but Eduardo Rodriguez has almost always been effective.

The left-hander looks to become the fourth 14-game winner in the American League on Wednesday night when he leads the Boston Red Sox into the finale of their three-game series with the Kansas City Royals.

Glenn Sparkman (3-7, 5.58 ERA) is 1-4 with an 8.08 ERA in his last seven starts, with that lone victory — a five-hit shutout of the Chicago White Sox on July 16 — looking more and more like an anomaly after each poor outing.

The right-hander was fortunate to not get a loss Friday at Minnesota, where the Twins tagged him for six runs and six hits with those three walks in 4 1-3 innings as the Royals eventually lost 11-9. The outing extended a season-long misery on the road for Sparkman, who is 0-4 with a 10.16 ERA in seven starts. Opponents have hit at a robust .353 clip in those games with 26 extra-base hits in 31 innings.

Sparkman did have a solid start at home versus Boston on June 4, conceding one run in 5 1-3 innings, but Kansas City’s bullpen imploded in an eventual 8-3 defeat. He has no record and a 12.38 ERA in four lifetime appearances versus the Red Sox, and Andrew Benintendi has three doubles in five at-bats in their matchups.

Rodriguez (13-5, 4.19) is looking to avoid back-to-back starts for the first time since opening the season with two losses as he takes the ball for the Red Sox.

The left-hander was denied a career-high 14th victory and sixth consecutive winning start Friday in New York, settling down after allowing a first-inning grand slam to Gleyber Torres and pitching 5 2-3 shutout innings after that. But Boston’s offense never found a groove and he issued a season-worst six walks in 6 2-3 innings of a 4-2 loss to the Yankees.

Eduardo Rodriguez has recorded at least one out in the 6th inning in 15 of his last 17 starts. His short outings are the exceptions now, not the norm. This is what developing starting pitching looks like in real time. #RedSox https://t.co/wQhOntWwlc

“I think he’s in a great spot,” Red Sox manager Alex Cora told the team’s official website about his lefty. “Last year, he would’ve just put his head down and it was going to be a short one. Now, he just kept working, kept making pitches, made adjustments. … His stuff was really good. His command, for the first three hitters, it was off. Too bad, because he actually pitched a very good game.”

Rodriguez was far more effective beating Sparkman and the Royals in June, holding them to two runs and six hits in 5 2-3 innings while striking out seven without a walk in that 8-3 victory. The southpaw is 2-1 with a 5.46 ERA in six career starts against Kansas City but 0-1 with a 7.45 ERA in four matchups at Fenway.

Alex Gordon and Whit Merrifield have proven troublesome for Rodriguez, going a combined 9 for 19 with two doubles.

The Red Sox are:

This line surprisingly came down from 11, and playing the hook is recommended. Sparkman’s road form has contributed to the over going 5-2 in his last seven starts, and the over is 8-3 in Kansas City’s last 11 against AL East opponents and 6-2 in the last eight overall.

Rodriguez has not been overpowering often this year, and that plays into taking the over. It is currently on a six-game run with him against AL Central opponents and 8-1 in his last nine starts versus sub-.500 teams. The over has also hit in all six of the southpaw’s starts against the Royals, including four at Fenway.

Rodriguez was essentially dinged for a run of three bad batters against the Yankees and quickly recovered to plow through that tough lineup over the next five innings. And the Red Sox should be able to take advantage of Sparkman, who has had failed to find any sort of success on the road this year.

Even with its season-long dominance of the Royals, Boston is not far enough removed from its recent struggles — especially after Tuesday night’s defeat — to consider hunting out alternate run lines for a better rate of return.

This as much an anti-Sparkman pick as it is pro-Red Sox offense pick. The Royals right-hander has an ERA of 9.00 or higher in each of the first two innings and has served up nine home runs combined in those frames. Sparkman has yielded two or more runs in the first three innings in his last four road starts and five of seven outside Kauffman Stadium.

Boston has scored two or more runs in the first three innings in six of its last 10 games, and the belief is that Tuesday night’s loss was an exception and not the norm. Look for the Red Sox to exploit Sparkman’s road struggles early to deliver the over.

While the 22-year-old has hit only eight of his 23 homers at Fenway Park, four of those eight have come in his last 11 home games — and the most recent one came in the series opener Monday night.

It is not every day one reaches for an alternate line to back a team that has lost nine of 10 games, but there is as much confidence the Red Sox turn this into a cathartic blowout against Sparkman as there is thinking Jakob Junis’ performance Tuesday night was the exception for the Royals rather than the new norm.

If one scans back before Rodriguez’s last two starts against the Yankees, the Red Sox were 7-0-1 at the midway point in the left-hander’s last eight starts and led by two or more runs in five of them.

Additionally, the Royals have not led after five innings in back-to-back road games since May 19 and 22 against the Los Angeles Angels and St. Louis Cardinals. Sparkman’s form does not inspire belief that streak ends in this contest.

Even with the under hitting comfortably in the first two games of this series and in Sparkman’s previous matchup with Boston at home, there is no confidence in his road form to think that will take place in this contest. The five-inning over is 4-3 in his seven road starts and 2-1-1 in his last four overall.

The expectation is Kansas City will nick a run or two off Rodriguez, and makes it a case of every little bit helps in clearing the flat number.