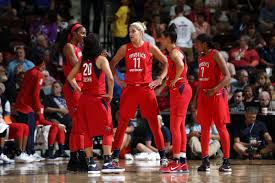 The Phoenix Mercury have every reason to be optimistic coming out of the All-Star break considering they closed out the first half of the season with three straight victories.

Those good vibes, though, will be immediately challenged Tuesday night when they open a difficult two-game road swing against the Washington Mystics.

The Mercury (10-8) have played all but one game without the league’s all-time leading scorer Diana Taurasi, whose return from a back injury is not expected any time soon. All-Stars Brittney Griner and DeWanna Bonner have shouldered the offensive load for Phoenix, ranking first and second in the WNBA in scoring at 19.1 and 18.7 points per game, respectively.

Add a much-improved defense which is tied with Seattle for the fewest points allowed per game (73.4), and it is clear why the Mercury see their glass as half-full.

“We kind of hang our hats on our defense right now, especially when the ball isn’t going in the basket,” Bonner told The Athletic after heading into the break on a 95-77 win over Indiana. “(Tuesday) we did both, and some people needed to see that as a confidence builder. When we do both we’re a pretty dangerous team, and I think everybody sees that and everybody knows that, but we’ll take this one.

“We’ll take these last three wins. They were a grind, but it was a lot of fun.”

The Mercury – who will wrap up this trip Thursday at Connecticut – can also draw strength from their first trip to the nation’s capital, storming to a 91-68 victory as Griner had 25 points and eight rebounds while Bonner contributed 22 points, seven rebounds and five assists. Phoenix pulled away in the second half by holding Washington to 24 points, including 10 in the fourth quarter.

Elena Delle Donne did not play in that game for the Mystics (12-6) due to a nasal fracture, but the All-Star captain powered Washington to a three-game winning streak into the break upon her return. She averaged 22.3 points and 9.3 rebounds in that run to help Washington move one-half game behind Connecticut and Las Vegas for the league’s best record.

Delle Donne also reached 3,500 points in her 176th game, the second-fastest in league history and just behind Taurasi (174) in Wednesday’s 79-71 victory over Minnesota. She credited a workout session with her father in regaining her shooting touch and has averaged 18.6 points on 52 percent shooting in her last nine games.

“I needed to get my mechanics back,” said Delle Donne, whose season average of 17.1 points ranks fifth in the league, to The Washington Post. “My dad has taught me how to shoot my whole life from when I was 5 years old, and there’s nobody that knows my shot better than him.”

Washington continues to pace the WNBA offensively, averaging league bests of 83.7 points and 8.4 3-pointers. Fellow All-Star Kristi Toliver, who had a season-best 32 points in the win over the Lynx, has averaged 17.0 points and 6.5 assists in her last four games.

One player the Mystics are counting on to help balance their scoring is forward Emma Meeseman, who has played just seven games this season due to representing Belgium in the EuroBasket tournament. Meeseman, who did not play in the loss to the Mercury earlier this month, scored in double figures in her first five games but had a combined four in the last two.