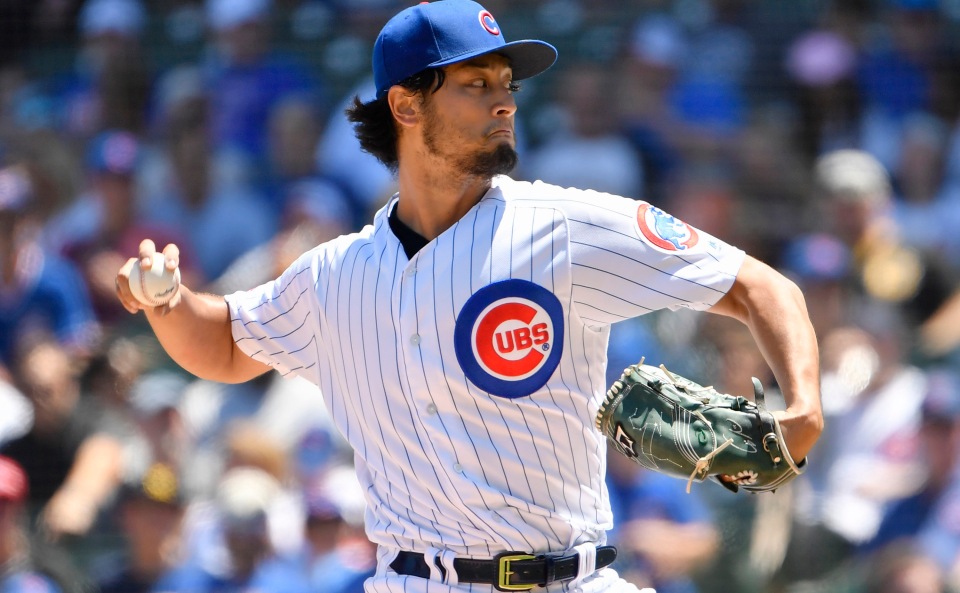 Yu Darvish has every right to be frustrated with not ending his lengthy winless spell last time out but every reason to be encouraged with his performance.

Darvish again seeks his first victory since late April on Wednesday when the Chicago Cubs conclude their three-game series versus the Cincinnati Reds.

Sonny Gray (5-5, 3.42 ERA) is looking to extend his personal winning streak to four games, but he has been very sharp in the three bracketing the All-Star break, winning two while posting a 1.27 ERA with 27 strikeouts in 21 1-3 innings.

Gray — an injury replacement addition to the NL All-Star team — pitched well enough to deserve a third straight winning start Friday at Coors Field, limiting Colorado to one run and seven hits in seven innings while striking out nine. He left with the lead before the Reds bullpen faltered in a 3-2 defeat.

“I feel confident. I feel good mentally. I feel good physically,” Gray told the team’s official website. “I just feel like I’m throwing the ball pretty well. I just want to continue to do that every time I go out there.”

When Gray has kept the ball down against the Cubs this year, good things have happened. He is 1-0 in two starts and all five runs he has given up over 11 1-3 innings in those games have scored on home runs.

His only other start versus Chicago was a loss with Oakland in 2016, and he will be making his first appearance at Wrigley Field. Albert Almora Jr. had one of those home runs and is 3 for 4 versus Gray.

What may be the most impressive part of Darvish‘s winless streak is that he has recorded only one decision in his last 13 starts, a 5-3 home loss to Atlanta on June 26.

On Friday, Darvish held an opponent to one or no runs while pitching at least six innings for the third time during his winless run, stifling the Pittsburgh Pirates on a pair of singles and a walk while striking out eight in six frames. The Cubs put together a three-run rally in the seventh en route to an eventual 4-3 win, but Darvish seemed content with the performance while noting the differences pitching injury-free.

“So last year, I had the elbow issue and I was doing rehab for eight weeks. Most of the time, I’d feel the pain with the fastball,” he told the Cubs’ official website. “I would try to feel less pain with a different arm slot. That’s why this year, the first eight weeks I had a weird feeling for the fastball. I don’t have any pain in the elbow, but I think my brain remembered that.”

Darvish is 0-1 with a 5.40 ERA in eight starts at Wrigley during his winless run, and the worst of those came against Cincinnati on May 25. He was drilled for season worsts of six runs and 12 hits in seven-plus innings, though the Cubs eventually won that game 8-6.

His other start against the Reds also came during his winless run, striking out 11 in 5 1-3 innings while yielding two runs and five hits in a 6-5, 10-inning road loss May 15. Darvish is 2-0 with a 3.48 ERA in five career starts versus Cincinnati and has struck out 36 in 31 innings.

Reds second baseman Derek Dietrich gas given Darvish some problems, going 4 for 9 with a pair of homers.

This is an all-in pick on Gray and Darvish continuing their recent form. The pressure is more on the Cubs right-hander to have back-to-back dominant outings, but he is capable — Darvish has held four opponents to one or no runs over the first five innings of his starts at Wrigley.

The five-inning under is 10-6-2 in Gray’s starts, but he has helped the Reds hold an opponent scoreless in the first five frames on eight occasions.

Gray’s run of strong pitching began with a win over the Cubs on June 26 in which he yielded a two-run homer to Jason Heyward and little else over 6 1-3 innings in a 6-3 victory.

That was also the last homer Gray allowed, his ninth in 97 1-3 innings on the season. With the wind not blowing out, there is confidence the Reds right-hander can keep the Cubs offense in check.

Gray gets the nod here as he has been pitching better and slightly more consistent compared to Darvish of late.

Something to keep in mind — neither pitcher is particularly good during the day, but until his last start, Darvish had not pitched well at the Friendly Confines in matinee matchups. He was 0-1 with a 6.58 ERA in five day starts at Wrigley, walking 18 in 26 innings.

The wind does not figure to be a factor in this contest, hence the low over/under of number, but the form of both pitchers gives confidence in a low-scoring game taking place on the north side of Chicago.

The under has trended strongly with Gray of late, going 6-2 in his last eight road starts and 6-2-1 in his last nine overall. Gray has also been a stopper of sorts, with the under going 5-1-1 in his last seven starts coming after a Reds loss.

It has been proficient for Darvish of late as well, going 4-1-1 in his last six outings. The under is 7-3 in Chicago’s last 10 games at Wrigley and 5-2 in the Cubs’ last seven overall.

There was some thought to hunting out the alternate line and laying the half-run with the Reds given Gray’s form, but grabbing the half-run in this instance is the smarter play given Darvish’s last start.

Gray has not conceded a run in the first five innings of his last three starts, but Tuesday night’s 3-2 lead marked the first time in five games since the All-Star break the Reds were ahead at the midway point. That is part of a trend dating before the break in which the Reds are 1-6-2 at the five-inning point in their last nine road games.

A “no” pick to a first-inning run, both pitcher sport sub-3.00 ERA’s in the opening frame. Gray’s lone first-inning mistake in eight road starts was a two-run homer by Jurickson Profar on May 8, while Darvish has allowed single runs in two of his last 10 starts.