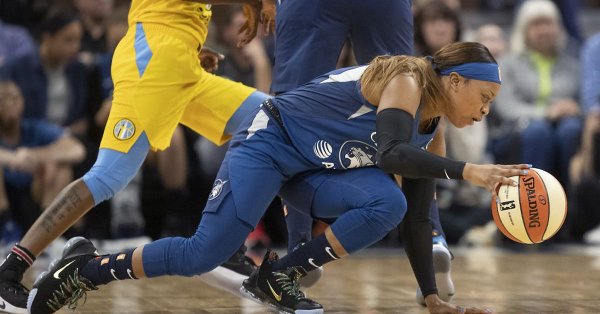 The Dallas Wings need rookie Arike Ogunbowale to have a short memory as they try to end a 12-game losing streak to the Minnesota Lynx on Sunday.

The fifth overall pick in the WNBA draft, Ogunbowale has experienced the highest of highs and lowest of lows in her last two games. After a 27-point effort in a 74-73 victory over the Connecticut Sun in which she made 10 of 17 shots, she had a horrific shooting performance Friday in Dallas’ 69-68 loss at New York.

Ogunbowale missed her first 10 shots and finished 2 for 23 overall – the worst performance of any player in WNBA history with at least 20 shots attempted according to STATS. She missed a pair of potential game-winning shots in the final six seconds as the Wings (3-7) were denied their fourth win in five games after an 0-5 start.

“Nothing you can do about that, that’s tough,” Ogunbowale told The Associated Press. “Shots didn’t fall.”

Theresa Plaisance provided a spark with 12 points and 10 rebounds, and she may have to do more on both ends of the court if center Isabelle Harrison is unable to shake off an ankle injury suffered late in Friday’s loss. Harrison had been helping Dallas compensate for the absence of Glory Johnson, who is representing Montenegro at the EuroBasket tournament in Serbia.

The Wings have yet to beat Minnesota since relocating from Tulsa after the 2015 season, losing all 10 games by an average of 12.3 points. They have lost 12 straight to the Lynx since an 86-78 victory June 21, 2015, but the last four defeats have all been by single digits.

Minnesota (6-5) appears to have righted itself with back-to-back wins on the heels of a four-game losing streak. The Lynx recovered from blowing a 22-point second-half lead Tuesday night to win 78-74 at Indiana as Damiris Dantas hit a pair of 3-pointers in a 10-0 fourth-quarter burst to re-establish control.

Odyssey Sims scored 25 points to pace Minnesota, but the guard could face league disciplinary measures at some point following her June 6 arrest on suspicion of drunken driving. Sims, who is averaging 15.2 points and 4.9 assists in her first season with the Lynx after being acquired from the Las Vegas Aces in the offseason, is scheduled to have a court hearing July 16.

“I’d like to apologize on behalf of Glen (Taylor, the Lynx owner), Cheryl Reeve and this organization,” Sims said in a brief statement after practice Thursday. “I take full responsibility for my actions. I know the consequences. And I’m going to get past it, move forward, continue to play hard every day, day-in and day-out. And get over it, eventually.”

Minnesota, which has split its four road games thus far, plays four of its next five games outside the Target Center.

Dantas scored 20 points while Sylvia Fowles added 19 and 12 rebounds as Minnesota hung on for a 70-67 victory at Dallas on June 1. Ogunbowale scored 11 points but was 5 of 13 from the field as the Wings shot 37.5 percent.