With three clean sheets and the maximum nine points, one gets the sense Uruguay has not been truly challenged at this World Cup.

That all changes Saturday in Sochi where Cristiano Ronaldo and reigning European champion Portugal await in the round of 16.

La Celeste had little problems finishing atop a Group A that included lightweights Egypt and Saudi Araba along with host Russia. The two-time champions did not face Pharaohs striker Mohamed Salah in their opener as he was held out due to a shoulder injury suffered in the Champions League final, faced little threat from the Green Falcons and outclassed a 10-man Sbornaya side that had little to play for as both teams clinched spots in the knockout round after the first two matches.

So facing Ronaldo marks the first time Uruguay will face a world-class striker in this tournament. La Celeste, however, were stifling defensively in their three wins; they yielded only seven shots on target and 19 attempts overall.

Offensively, Uruguay needed all three matches to shuffle through its gears, but its 3-0 victory over Russia may have been the perfect jumping point as both Luis Suarez and Edinson Cavani scored goals. Suarez also scored against Saudi Arabia, and while Cavani’s goal was from close range, it definitely eased the pressure on the PSG striker after his struggles in the first two matches.

La Celeste are in the knockout round for the third consecutive World Cup, with the high-water mark their fourth-place finish in 2010. They lost to continental rival Colombia in the round of 16 four years ago in Brazil.

Ronaldo is already enjoying the best of his three World Cup appearances as he enters this contest second in the race for the Golden Boot with four goals. The Portuguese superstar also became Europe’s all-time leading scorer with his most recent tally, the match-winner in a 1-0 victory over Morocco that was his 85th in 153 appearances with A Selecao das Quinas.

Portugal finished second to Spain in Group B, matching its Iberian rival with five points but scoring one less goal as it finished with five. Its 3-3 draw versus Spain on the second day of the World Cup ranks up there as one of the best matches the tournament has ever produced, with Ronaldo’s hat trick capped by a spectacular free kick in the 88th minute rescuing what proved to be a vital point.

Yet there were some nervy moments late as Portugal was held to a 1-1 draw by Iran on Monday. A Selecao conceded a penalty in second-half stoppage time, then allowed a high-quality chance that whistled wide of Rui Patricio’s left post just before the final whistle that would have dumped them out of group play.

The Real Madrid star’s scoring prowess has hid some defensive deficiencies for Portugal, as it struggled at times to impose its will on matches in a finely balanced Group B and suffered at points in all three matches. Given Uruguay has two forwards who can make life miserable for veteran central defenders Pepe and Jose Fonte, there will be pressure on both ends of the pitch for A Selecao, who may have to outscore La Celeste as opposed to trying to hit them on the counter or rely on a moment of magic from Ronaldo.

HOW THEY GOT HERE 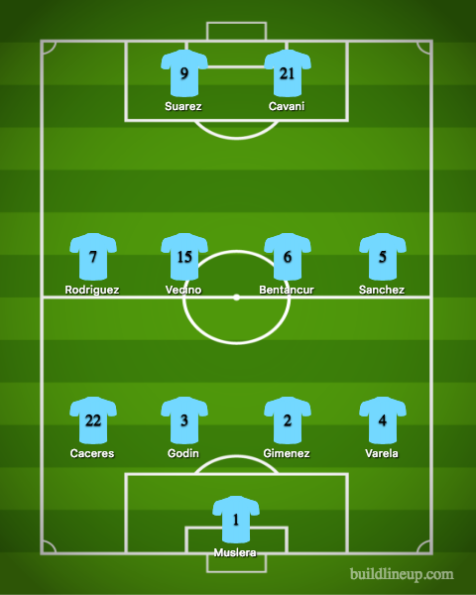 Both teams are expected to line up in a 4-4-2 formation. Uruguay coach Oscar Tabarez’s spine has remained steady with Fernando Muslera between the sticks, Diego Godin and Jose Maria Gimenez in central defense and Matias Vecino and Rodrigo Bentancur in midfield. Tabarez likely will stick with Carlos Sanchez on the right flank, though it is possible veteran Cristian Rodriguez could be swapped out on the left for Giorgian De Arrascaeta.

Portugal manager Ricardo Santos will have to choose between giving midfielder Ricardo Quaresma a second straight start out wide on the right after his well-taken goal versus Iran or restore Bernando Silva. Adrien Silva did enough against Team Melli he should remain over Goncalo Guedes, and left back Raphael Guerreiro has caused some nervous moments in front of Patricio.

Gimenez was held out of Uruguay’s victory over Russia due to a thigh injury, and while his status for this match has not been made definitive, he did return to practice Wednesday. In the event the Atletico Madrid defender cannot play, Sebastian Coates would be his most likely replacement after playing the full 90 versus Russia.

Bentancur is the only Albiceleste player on a yellow card.

Portugal do not appear to have any injury issues, but six players are on yellow cards, including their first-choice striker tandem of Ronaldo and Adrien Silva. If they, along with Cedric, Guerreiro Quaresma and Bruno Fernandes can avoid picking up a second booking, they will all have their cards wiped away.

Cavani’s goal against Russia was his third career marker in the World Cup as he has scored one each in the last three tournaments. The PSG forward, though, is looking for the form that allowed him to bag seven goals in South American qualifying and another two in the China Cup in March.

Cavani has taken a team-high 13 shots and is tied with Suarez for the lead with four on target. That latter figure does not include a shot off the post against Egypt in Uruguay’s opener.

Every time you think it’s impossible to overstate Ronaldo’s importance to Portugal’s offense, there is another statistic that comes along to continue keeping it in perspective. He has taken 15 of A Selecao’s 32 shots and seven of the team’s nine shots on target have come from him.

Ronaldo’s ratio of shots to shots on goal is markedly better than it was in helping Portugal to the Euro title two years ago when he put only 12 of his 46 attempts on frame, and he has scored more goals in Russia than he did in the seven games in France in 2016.

This will be the first World Cup meeting between the sides, who have met only twice previously and not since a 1-1 draw in the 1972 Independencia, which was a 20-team tournament to celebrate Brazil’s 150th anniversary of independence. Portugal won the other match 3-0 in a 1966 friendly.

Per Ladbrokes, Uruguay is a narrow favorite at 33/20 odds, while both Portugal and the match going to penalty kicks is listed at 9/5. Ronaldo is the top choice for first goal-scorer at 16/5, while Suarez and Cavani are right behind him at 7/2. Uruguay veteran Maxi Gomez, who made a late cameo against Russia, is a curious listing at 9/2, and Portugal’s kiddie corps of forwards — Silva and Guedes — are joint 13/2.

In a word, cagey. One gets the sense this match is going to be decided by which team can move forward wide to set up their forwards with crosses in the penalty area. If there is one area where Uruguay have an advantage, it is that Gimenez and Godin are intimately familiar with Ronaldo’s patterns having faced him so often in their Madrid derbies.

Additionally, Pepe and Fonte have had torrid moments at times dealing with opposing forwards, evidenced by the way Diego Costa manhandled them in the Spain match. Cavani is the more physical of the two Albiceleste forwards, but most eyes will be watching Pepe and Suarez, who could turn this match into a theatre of the absurd with their play-acting.

Both teams scored first in all three of their respective group matches, and Uruguay has yet to trail in Russia. Ronaldo may have caught Spain’s backline napping when he earned the foul that led to his match-tying free kick, and given he has already scored twice in the opening five minutes of a match, Fernando Muslera should be on his toes for an early rasper.

Though Coates is more than serviceable in the event Gimenez cannot play, it still is a disruption Uruguay will have to work hard to overcome. While Portugal is good, the end of the line is in Sochi at the hands of the Albiceleste, who will post a fourth clean sheet while getting goals from either Suarez or Cavani, or possibly both.

The winner of this match will play the winner of the match between France and Argentina in the quarterfinals July 6 in Nizhny Novogorod.